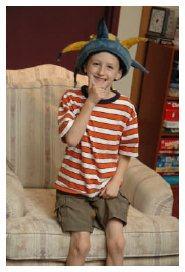 We decided to enroll our son, Nate, in a class at West Metro after a friend recommended the center to us. Nate was 5 years old and had recently been diagnosed to be on the autism spectrum. At that time, Nate had trouble making eye contact, fixated on his special interests, rarely shared enjoyment with other kids and preferred to play alone. Most of the time, Nate was “in his own world,” rarely referencing or noticing what anyone else was doing and had a very hard time managing his emotions. Nate is now 7-½ years old and beginning his 14th class at West Metro.

We knew he really enjoyed the classes when he once asked his teacher “not to fire him from West Metro” because he got a reminder in class. He has also made tremendous progress which became very apparent at his recent elementary school IEP re-evaluation meeting. Although Nate still struggles with some impulsivity, his social skills have improved radically.

Nate is well liked at school and has many friends who he plays with on a regular basis. He initiates play with others, is able to identify what things his friends like to do and holds meaningful conversations with them. Nate has significantly improved his eye contact and manages his emotions using the 5-Point Scale™. Additionally, he is often able to identify the emotions of others and respond appropriately. He has also fully embraced the use of visual schedules and has even developed some of his own.

We believe that this amazing improvement is God’s work and grace in his life, much through the blessing of West Metro Learning Connections and its teachers.

We are very blessed to have this group of people who care so much about Nate and who have invested so much time and effort into knowing him and teaching him skills that will help him have meaningful relationships as well as live life to his God-given potential.